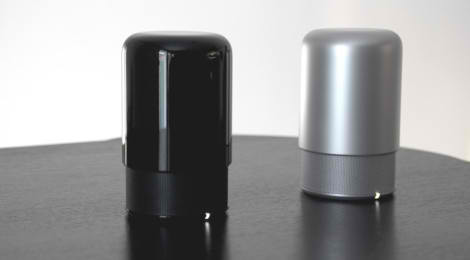 Californian design duo of John Van Den Nieuwenhuizen and Vitor Santa Maria have returned with their revamped HiddenRadio2, the predecessor of the award-winning HiddenRadio speaker. Although its minimalist design is very similar to the original, the new model will feature an array of intuitive improvements to deliver a superior sound.  Users can simply touch the top of its exterior or press play on their phone for it to automatically lift its shell and reveal the inner speaker system. Within, HiddenRadio’s proprietary neodymium dual speaker system combines with its custom software to allow for amazing highs and lows as well as a deeper bass. HiddenRadio2 also features a new Bluetooth enhancement, an intelligent touch sensor cap, the option to switch to speakerphone, NFC compatibility, a 15-hour battery life and of course, 360 degrees of awesome sound.

Although HiddenRadio2 has reached its start-up goal, you can still make a pledge over at Kickstarter
Filed Under:Gadgets,Hardware Reviews,Tech