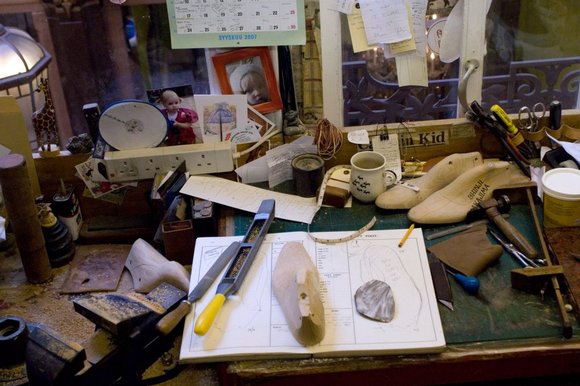 The modern shoelace wasn’t invented until 1790. That small, mechanical plastic covering on the end is called an “aglet”, from the French for a needle. Aglet is mentioned in Shakespeare, so the end of the shoelace was a thing at least 300 years before the eyehole for it to go through was made — fashion, the stuff of madness. Until the 19th century, shoes were made on straight lasts, so you chose which was the left and the right, and they were all handmade. Every town had its cobblers, boot-makers, clog-carvers and cordwainers (from “cordovan”, horse leather). A pair of shoes was the basic measure of poverty — shoes kept you out of the mud. In the 20th century, manufacturing made them cheaper and then just cheap, until a pair of flip-flops or generic trainers cost less than lunch. Shoes became a lady thing. It was women who lusted after them, cared about them, pressed their noses up to the window, lied about how much they cost and hid the boxes. Shoes became a fetishised, female object — they were as addictive as drugs and fulfilled much the same purpose. Men rolled their eyes and left footwear to the girls. Shoes stopped being the measure of a man. We didn’t have favourite makers or celebrity cobblers; we had trainers, and lace-ups for funerals and interviews. We stopped polishing them or judging each other by them. Nobody who isn’t sitting in a club and calls his wife “little woman” cares about brown in town or only black with blue suits. How many of you own a shoe cleaning box or special brushes, or spend your Sunday nights polishing, ready for the office on Monday? And who buys shoes to last? (Excuse the pun.) Well, a surprising number of us, actually. There’s a new and growing interest in traditional shoes. It’s like we suddenly looked at the piles of odorous nylon and rubber in our closets and thought, “Oh for God’s sake, grow up.” And with conservative, grounded feet that look like they’re going somewhere, there has also been more interest in handmade shoes. Bespoke used to be the preserve of people with medical problems and trannies. Now a lot more men are going for handmade, and you have to ask why, because machine-made shoes fit, and are comfortable and generally well made. But there is a particular pleasure in having shoes that are just for you. It’s an indulgence that you need to think long and hard about before giving in to. Handmade is fearsomely addictive — the shoes are the crack of the bespoke game. They can take over your wardrobe and your life, and walk away with the school fees. The very best are very, very expensive indeed. George Glasgow leans against the shelves in GJ Cleverley with his arms folded. Glasgow is a bit of a legend in the cobbling business. He is a bespoke salesman with a chummily brusque manner: “First-time customer? You’re not going to see your shoes for eight months; maybe I could do you in six, but we’re up to here with work.” Glasgow makes shoes not just in London, but also in Hollywood, though you could easily pass his shop without noticing. It’s set in an arcade off Bond Street and has none of the ostentatious glamour of international luxury brands. But if you know about shoes, the few examples in the window will stop you in your tracks. Cleverley is famous for particularly elegant, neat and fitted shoes. They have a chiselled, sloping toe; they make your feet look like a couple of digits have been surgically removed. If you know what you’re looking at, you’ll recognise a Cleverley foot across a crowded room; then, when you do know what you’re looking at, you’ll feel a brutal envy.

Upstairs in the shop’s attic is a heaven of lasts — hundreds and hundreds of wooden feet, hanging like clusters of bats. They are the footly remains of film stars, of dukes, dictators and footballers; the great, the good, the wicked and the richly undistinguished. “We don’t make pairs of shoes,” says Glasgow, “because you don’t come with a pair of feet — they’re different. We make them so you won’t know you’ve got them on. Though we had one customer, who must have bought dozens of pairs, and I noticed his shoes were pinching. I said, ‘They’re too tight, let me fix them.’ He said, ‘No, I like them like this — I don’t walk anywhere, my car takes me to my club, I sit at the bar with my legs crossed and my foot out. The other old men walk past and say, “Beautiful shoes, Webster.” Then my car takes me home. That’s why I have handmade shoes.’ ” I could tell you what the starting price is for a pair of Cleverleys, but it would just spoil your breakfast. It’s the last and the time that makes bespoke so pricy. It takes at least four pairs of rarely skilled hands (hands, apparently, do come in matching pairs) to make every Cleverley two-shoes. The finishing and polishing take hours. On the other foot, Tim Little, on the King’s Road in London, offers a bespoke service that costs not much more than your girlfriend’s Jimmy Choos, but there is nothing cut-price about these shoes — they’re elegant, solid, honest and very, very British. They march to the sound of Elgar and the rhythm of Auden. They’ve got manners and humour, they’re the shoes that stand up when ladies come into the room, and you’ll never see them on the opposite seat on the train. They’re handmade in Northampton. Little particularly likes the history and heritage of British shoemaking that lives on in the craft. The sum of English cobbling is in the welt, that strip of leather that attaches the upper to the tread. All British shoes have it — it’s what keeps England out and your feet dry. Italian shoes, on the other hand, tend to be lighter and more flexible because the uppers attach directly to the lowers. Tom Ford now offers a swish made-to-measure service in his Sloane Street shop, with fittings in a personal sitting room, for shoes that are made in Italy. He says that 20% of his men’s business is now made to measure. Men want unique, not mass-made. There is less comfort in conforming. We’ve had 20 years of wanting the same trainers as everyone else in the playground, and now we deserve something that’s just for us. We are once again judging each other on the shine of our toecaps and putting our best foot forward. I asked the artist Mark Quinn if he had ever had shoes made. “Yes,” he said, “I have my trainers made online by Nike.”  There is an artistic branded irony there. It’s difficult to explain quite what the appeal of bespoke shoes is, but actors often say that they need the right shoes to create a character, and I have one pair of handmade shoes that I invariably wear if I have something important or testing to do, or if I need all the confidence I can muster. They make me feel the best I can be, and although they were by far and away the most expensive bit of kit I’d ever bought at the time, they are the only piece of clothing I own that have unquestionably earned their keep a dozen times over. At the moment I’m having a pair of chappals hand-made by ancient skilled craftsmen. They are possibly the oldest shoes still being worn. They are made in Peshawar in the old North-West Frontier Province of Pakistan, where we couldn’t set foot in safety, but the outline of my feet have gone there in my place, and the chappals will some day return, the finely sewn sandals that have walked in the high places, the opium fields and the crowded souks of Afghanistan. They’re practical, they’re beautiful, they’re romantic — and nobody else in Hoxton is going to be wearing them.

Every man needs a brilliant leather biker, and Alexander Leathers made-to-measure jackets are just the ticket. They’re handmade in Scotland — you even get your name sewn in the lining. From £500; stuartslondon.com

Every City boy knows the power of a bespoke shirt. Turnbull & Asser offers an array of fabrics and cuff and collar styles. From £225 per shirt (first order, minimum of six)

Barbour Tailoring launched this season. The selection of heritage tweeds and trims means there’s little chance of seeing your mate in the same one. From £279

There are more than 4,000 bespoke variations for Tusting bags, thanks to the different styles, leathers and trims on offer. Perfect for all you individualists out there. From £220; tusting.co.uk
Filed Under:Grooming and Fragrance,Lifestyle,Men's Gear,Men's Style,Spotlight on Brands,Spotlight on: Retail Fashion