You are here: HOME / Grooming and Fragrance / To Shave Or Not To Shave – A Man’s Question

To Shave Or Not To Shave – A Man’s Question 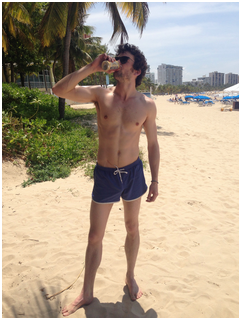 The warmer weather must surely be on its way soon! Well, maybe a better word at this time of year is ‘eventually’. However, with the trend for winter sun holidays hotting up, you may be pulling on the shorts quicker than you can say thongs. But what are you going to do about your legs? They’re probably pretty pale and more than a little overgrown by now. Do you trim, shave or leave them?   Leg hair for guys never used to be a problem, but in the last couple of decades, guys have been watching their personal grooming more and more. While the trend for facial hair and beards is booming, the need to streamline the body is still a little stop-start. So what do you do? Body builders, models and athletes prefer to go completely fuzz free. Their entire bodies are under scrutiny, and the hard work they have put into them needs to be shown off. But for Joe Public, where do we draw the line?   Most guys would say taking care of their hair and face is more than enough to have to contend with. That’s fine, but when it’s hot, or you want to go swimming, how do you manage the back hair and chest hair? Trimming is becoming the norm for leg hair that is dark and becomes more like furry leggings than the stuff of sexy men. But would you remove it altogether?

This photo courtesy of Flickr.com

Back hair has become a social taboo. No man is seen with hair between the shoulder blades if they can help it. And what a pain in the you know what it is to get rid of when you can’t reach it or see it! Some guys get their more tolerant other halves to do it. Some head down to the men’s spa to wax it off. Waxing the back is one thing, but waxing other, more sensitive, areas of the body may be a no-no for you.   Chest hair is a matter of taste. Younger guys prefer to be completely fuzz free if they are showing off their pecs and abs. That’s great, but older guys who don’t feel the urge to remove their tops might not bother. Most women seem to prefer hair-free chests and tummies. But it’s your bod, and you should do only what you feel comfortable doing.   So what about these legs? Shorts are kind of essential in hot weather, even if you’re not having a high fashion moment. For a casual setting, like a barbecue with your mates, do you really want to have smoother looking legs than your girlfriend? Some guys are lucky and have shortish, blondish hair on their legs that are rather unintrusive. Some poor souls have black hairs longer than the ones on their head, and sometimes more abundant too!   For those with hair that just won’t quit, you could try trimming it down with a men’s body trimmer. Shaving and waxing the legs does take time and maintenance, but trimming the leg hair may be less of a bother because it requires less precision to be effective.
Filed Under:Grooming and Fragrance